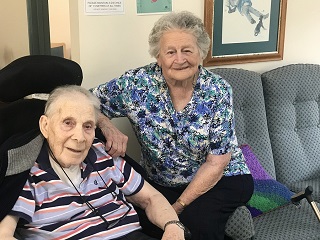 The couple met in Townsville in 1954 when they were both working for major pastoral and agricultural company Dalgety, and courted for two years - enjoying dates at the local picture theatre, milk bar and at occasional dances organised by the Country Women’s Association or YMCA.

They went on to get married at the Presbyterian Church in Townsville on 24 March 1956 which, according to Amy, was later ‘blown away’ in a cyclone.  A year later, their first daughter Deborah was born, followed two years later by their son Johnathon. The couple now have five grandchildren and six great grandchildren, including triplets, born in July last year.

According to Amy, who will turn 90 years old this year, her husband Bob – an accountant by profession who also has a passion for history - is one of the “kindest men you could every meet.”

“Bob has been a wonderful partner for all these years and we’ve have had a very happy life together and are extremely proud of our children, grandchildren and great grandchildren,” says Amy, who together with her husband has travelled extensively during her life, throughout Europe, Canada and America.

“We loved to travel, though I think some of our happiest times were when we lived in Sydney, which we called home for almost 40 years.

“I’ve been asked if I have any tips for a long and happy marriage, and all I can say is that it’s about give-and-take and compromise too,” she says.  “Plus we have both lived quiet simple lives in many ways, neither of us have ever had a drink in our lives, and we’ve never smoked either.”

Mercy Place Edgewater Service Manager, Surabh Nair, says Amy and Bob have had, and continue to have, a wonderful partnership.

“Amy and Bob are well-known in our Mercy Place community and are clearly still devoted to each other, despite the fact that Bob lives with us now at Mercy Place Edgewater,” he says.

“We are very keen to make their wedding anniversary an extra special occasion for them as they are the loveliest couple, and they obviously still think the world of each other.”