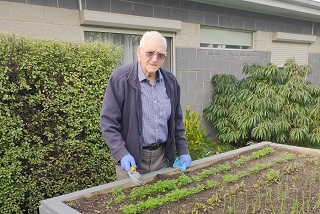 It’s not every day you have the chance to blow out 100 candles, however, March 2021 takes the cake with a trio of Mercy Health aged care home residents joining the elite club of centenarians in Australia.

In Geelong, Mercy Place Rice Village resident Joyce Thetford celebrated her 100th birthday on 18 March. Joyce reflects on the life she has had and describes growing up in Hampton, Victoria as idyllic, after moving from dreary England in her early life.

“I loved to play hockey and tennis in school, but my true passion was dressmaking. I went to a technical school in my early 20’s to learn the art and then went on to teach at McCabe Academy where I met my husband,” Joyce said.

“I love that I can continue to enjoy crafts at Mercy Place Rice Village with many craft sessions every week including sewing, embroidery, knitting and beading.”

When reflecting on what helped her reach the centenarian, Joyce reflects on her secret ingredient.

“My secret to a good life is looking after yourself, growing your own vegetables, being active and maybe a nip of green ginger wine sometimes!" Joyce said.

Irene Hardener, resident of Mercy Place Montrose in Melbourne’s east has no shortage of friends, children, grandchildren and even great-grandchildren, who were keen to celebrate her 100th birthday on 21 March.

An active member of the war services and a keen world traveller, Irene is certainly not lacking in life experience and often reflects on her journey to 100.

“We had the most wonderful times travelling around the world. Japan, Canada and France were my favourites,” Irene said.

To support in the celebrations, Seniors Victoria shared a video presentation that helped Les share this big milestone and his life story with his friends, family, residents, and staff, all with the assistance of technology.

“I’ve done some interesting stuff over the past century; from serving in the infantry in the middle of the Papua New Guinea jungle, to selling my house and travelling across Australia,” Les said.

Lastly, just when you thought you couldn’t get enough of 100th birthday milestones, Mercy had the privilege of welcoming two 102nd birthdays, one in Albury, Victoria and the other in Lathlain, Western Australia.

Mercy Place Albury resident Evelyn 'Billie' Trebly celebrated her 102nd birthday on 19 March. Born in Culcairn, New South Wales, Billie is the youngest of five children. A mother of three, one of Billie’s greatest pleasures has been watching her family grow.

Across the East to the West of Australia, Mercy Place Lathlain resident Ivy Ballentine celebrated her 102nd birthday on 16 March with a party in her local park - surrounded by her children, grandchildren, and great-grandchildren.

Ivy puts her longevity down to staying curious, volunteering, and remaining dedicated to helping others.