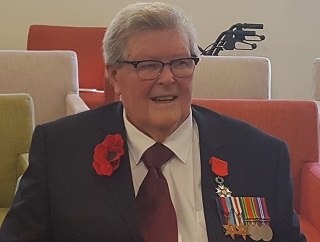 More than 100 years on from the birth of the Gallipoli legend, Mercy Place Mont Clare will commemorate the ANZAC heroes and other ex-servicemen and women in its midst ahead of ANZAC Day on Sunday April 25.

And as one of several residents who served their country during World War II, 95-year-old Norman Walker (pictured) will be one of many to remember those who were involved in the war effort at a commemorative ceremony at the not-for-profit home.

Mr Walker joined the Navy in October 1943 when he was 18, and saw active service the following year, marking his 19th birthday while being involved with the Normandy landings, and the wider campaigns to liberate France in 1944

The Englishman served for four months on Juno Beach in Normandy, before being sent to Belgium where he saw active service until the war in Europe ended in 1945.  He later immigrated to Australia as a 10 Pound Pom, leaving Tilbury Docks in October 1951, disembarking in Sydney. He then moved to Bathurst, then Goulburn and then in 1953 he moved to Fremantle.

In 2019, Mr Walker was presented with The Legion of Honour - the highest French order of merit for military excellence - which was established in 1802 by Napoleon Bonaparte. Known as Chevalier de la Légion d'Honneur, it was presented to the Mont Clare resident for his service to France during WWII. The honour is an expression of France’s gratitude to those who risked their lives for the country’s liberation.

“Every year Mercy Place Mont Clare acknowledges the exceptional contribution of all Australian servicemen and women in our ANZAC Day ceremony, and in particular it’s a time for us all to reflect on the bravery and selflessness of our residents, who lived through and also served in World War II, including Norman, whom we all have incredible respect for,” she said.

“Indeed, our ANZAC day commemorations enable many of our residents to reflect on the war years, reminisce about that time whether they were an adult or a child, and also remember those who lost their lives. It’s an important day for all of us.”

Residents at Mercy Place Mont Clare will commemorate ANZAC Day by holding a small service within the home on Friday 23 April.