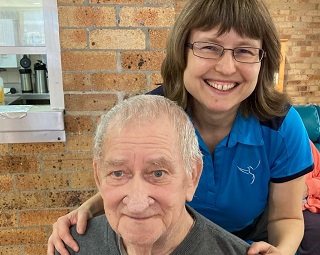 With the assistance of staff at Catholic Healthcare’s St Hedwig Village Aged Care in Blacktown, resident Hellmut Schroeder has reconnected with his long-lost sister and children in Germany.

Hellmut, described by the staff at St Hedwig’s as a “very quiet gentleman”, recently expressed an interest in finding his sister and children after having no contact with them for several years. Hellmut has been living at St Hedwig’s since April 2020.

Hellmut was born in the former country of East Germany and moved to Australia in 1966 with his second wife Ursula, arriving by boat in Melbourne. Hellmut and Ursula were initially transported to Bonegilla Migrant Camp in rural Victoria before settling in Quakers Hill.

Since Ursula passed away in December 2019, Hellmut lost contact with his children Olaf and Vera (who are based in Germany) and his sister Ingrid who also resides in Germany. Having no other relatives in Australia, he found himself increasingly lonely and isolated.

With the sleuth-like help of the caring staff at St Hedwig’s, Hellmut is now reconnected with his sister and children.

“It was a process of endless searching through old paperwork and documents”, says Noreen Nakic, Recreational Activities Officer at St Hedwig. “This process helped us to locate Hellmut’s sister’s details on an old inheritance certificate.”

Ms Nakic, who has been working at St Hedwig’s for 16 years, is also originally from Germany. She was able to reconnect Hellmut, his sister and the children through her own relatives who coincidentally reside in the same city as Hellmut’s sister. Since then, Hellmut, Ingrid and the children have spoken frequently on the phone and are exchanging regular emails.

Hellmut said, “I am so grateful that the staff go above all expectations and have reunited me with my family".

Located in Blacktown, St Hedwig’s Village was originally established by the two German Catholic communities of St Raphael’s Blacktown and St Christophorus Croydon over 33 years ago. The Village primarily provides care to the German speaking population of Sydney and seniors living in the Blacktown area.

Find out more about Catholic Healthcare.