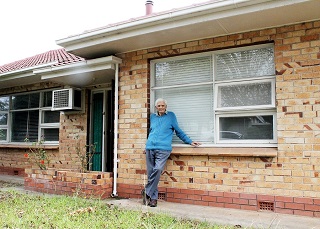 Resthaven Limestone Coast Community Services client, Mr Harold Ball, 100, doesn’t let age get in the way of his independence. Living happily at home in Naracoorte, Mr Ball still drives, gardens, and cooks – albeit ‘a little slower’ than in younger years.

Mr Ball was born in the small town of Dartmoor on 21 December, 1920, however, the family "left when I was two years old and went up to Casterton. My dad ran a mixed farm; cows, fat lambs, that sort of thing."

"We stayed in Casterton until I was 12, when my father had a [job] contract that took him to Mount Gambier."

"My dad said, 'Would you like to go back to Dartmoor?' and I said 'yes'. I finished my schooling there, living with my grandparents."

"At 14, I finished school with my merit certificate, and headed back to Mount Gambier. My father got me a job in a garage, and I was there for three years."

In 1938, Mr Ball moved to Naracoorte, and landed a job driving the Mount Gambier-Naracoorte bus line.

"I would drive the bus seven days a week back and forth between Mount Gambier and Naracoorte, delivering not just people but mail and parcels too."

"This continued until the war came. I had five years away in the war, then I was back on the road again."

It was after the war that Mr Ball met his late wife, Margaret. He says, "When you come out of the army, everyone is x-rayed. Well, I had a spot on my right lung."

"I spent three months in hospital as they tried to work out what was wrong with me; turned out to be a cyst the size of an orange."

"I was sent to Daws Road, and it took ages to recover. In the meantime, there was a lovely red-headed nurse named Margaret looking after me."

"When I came home, she came with me!"

The couple were married on 11 December, 1946, and came to live in Naracoorte, in "a big home over the other side of town." They had one son and two daughters. Mr Ball now has seven grandchildren and six great-grandchildren.

Mr Ball says he set himself up with a garage in Naracoorte, which he ran for around 30 years.

"I’m a qualified auto electrician and motor engineer," he says, "But I’m pretty sure things have changed a bit since I retired 30 years ago!"

The couple also travelled around Australia six times, travelling "right up the centre – there were hardly any roads in those days, you just drove over the cracks!"

Sadly, Margaret died in 1993, after almost 47 years of marriage. Harold says, "I’m lucky that Margaret and I got to do it all together."

Mr Ball was also a keen sportsman, playing "lots of sports, but especially tennis. At one stage, I was the oldest competition tennis player in Australia, aged 89."

Harold moved into his current home in Naracoorte around 20 years ago, where he continues to live independently, with support from Resthaven Limestone Coast Community Services.

"The Resthaven staff come in three mornings a week," he says.

"I’ve always been able to handle things myself, but then I had a big fall, and my family said, 'You’ve got to have someone to look after you'. So we got Resthaven in."

"I can still do everything myself, but it’s nice to know that someone is there if something happens – and to make sure I don’t brain myself in the shower!"

Mr Ball celebrated his milestone birthday with a big bash for around 70 family and friends at the local football club. "The girls [daughters] put an ad in the paper, and everyone dropped by that weekend," he says.

"I got to sit there with a nice cup of tea, and everyone came to me!"

A fitting celebration for a community man.

Thank you for sharing your story, Harold!