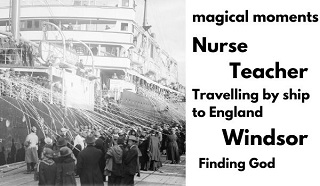 The Victorian Government is celebrating seniors living in aged care with a new initiative called Recognising Senior Victorians which is designed to showcase the resilience shown by aged care residents and staff throughout COVID-19.

Four Mercy Health aged care residents have been recognised in the new initiative, shining a light on the incredible life stories that exist between the walls of Mercy’s residential aged care homes.

At Mercy Place Warrnambool, resident Molly Richards has reflected on how she transformed her life, working in a labour intensive hospital job to travelling by ship to the UK to start a new life securing her dream job at a preparatory school three-miles out of Windsor.

“My sister was already in England working as a teacher and I thought, “Right I want to go to England. I want a different scene, I’ve had enough of nursing,” Molly said.

“It was wonderful. Living in Windsor, there was always something going on. We were considered to be neighbours of the [Windsor] Castle so we had special privileges.’

At Mercy Place Templestowe, resident Bruce Kilsby discusses his life story as a hard-working man.
From an early age, Bruce proved to be a natural at ‘tinkering’ with all things mechanical. At 17, he started a mechanic business with one of his older brothers, and after years of hard work was able to buy his sibling out.

Bruce soon built a reputation as the guy who could fix anything. He’d even design and make his own tools to fix unique mechanical problems that had others stumped in his local community.

“You can say that I'm a determined bugger… Nothing will stop me,” Bruce said.

Whilst he enjoyed his work marrying his wife Helen O’Brien and having five children together remains Bruce’s highlight.

“My wife was a very pleasant lady. Luckily the children took after her, not after me”.

Win-Louise was a good student and earned a scholarship to the University of Natal, where she studied social sciences.

“It was strange when I was at university because we had some African students that we weren't allowed to mix with and they were really very knowledgeable… I didn't like that,” Win-Louise said.

She went on to meet her husband Claude when he was an engineering student, and not long after the couple soon had three girls. When the couple retired, they began their incredible work on the mission in Natal before visiting their oldest daughter in Australia and falling in love with Melbourne.

“We all just love Australia. I would never go back to South Africa. It's a very beautiful country and I remember the beauty of it with real pleasure, but Australia is my home now."

Lastly, at Mercy Place Colac, 99-year-old Les Trigg (Trigger) is being recognised for his extraordinary story of resilience and determination in World War II.

‘When I was a baby of 15 months old, I lost my mother. She was an English war bride from the first world war. My dad was working on the Great Ocean Road so my sister and I were put in a family home, but they were terrific to me,” Les said.

At 19, Les was called to fight in World War II where his experiences fighting in the jungles of Papua New Guinea left him struggling with memories of war.

However, despite his hardships, Les reflects on his life as a happy one, with his secret to a long life being a simple.

"Determination and don’t look for anything negative. Look forward. Never look behind you."

To find out more and listen to the stories of other aged care residents being recognised, visit the Recognising Senior Victorians website.