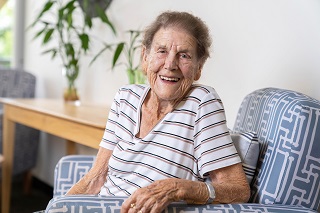 Shirley Davison reckons the secret to reaching 100 years of age is “good luck and good genes.”

The avid sports fan and bookworm turned 100 on 25 June.

The oldest of three siblings, she was born Shirley Flower in Camden, an outer suburb of Sydney, in 1921.

Her father was a banker so Shirley moved around country New South Wales a lot when she was a child.

Shirley went to boarding school in Gunnedah, which she enjoyed. She recalls being a good student who relished learning new things.

Like her father, Shirley worked in the banking industry as a bank clerk, but she didn’t really enjoy it, so she undertook secretarial work for a solicitor which was much to her liking.

The days were long for Shirley during World War II. After working her day job, she would undertake farming duties.

“During the war I continued to work as a bank clerk but after hours I worked harvesting hay as the men were all away at war. I enjoyed the work a lot. It was fun,” Shirley recalls.

Soon after, Shirley met her future husband Clifford Davison and the couple lived in Sydney.

They had three children – two sons and a daughter – and Shirley also has five grandchildren and four great-grandchildren.

After moving to Brisbane from Nowra two decades ago, Shirley lived at Wavell Heights and then New Farm.

Shirley loves watching sport and you will often find her in front of a television enjoying a game of rugby league.

“Even though I was born in New South Wales, I am a Queensland State of Origin supporter now. It is because I became a fan of Johnathan Thurston when I moved here,” Shirley explains.

“I enjoy watching football and tennis too, especially Roger Federer.”

Shirley is also an avid reader who enjoys historical novels and Agatha Christie mysteries. She has many other favourite authors and will try any book recommended to her.

“I have always enjoyed reading and consider myself to be very well read of all sorts of genres,” Shirley said.

When asked what she thinks the secret to living a long life is, Shirley replied: “I think it’s is a combination of good luck and good genes. Most of all, have fun.”