Sisters’ Firm Friendship to Be Celebrated on International Day 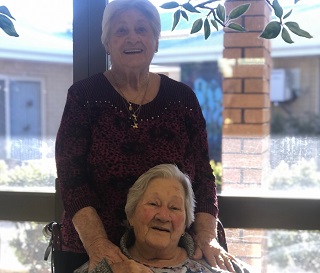 International Day of Friendship later this month will have special meaning for two residents living at Mercy Place Mandurah.

That’s because sisters and octogenarians Shirley Cosh and Maureen Brown admit to having been good friends all their lives. And now they say that friendship has even strengthened in later years with the pair living in adjacent rooms at the not-for-profit aged care home.

Born and bred West Australians, Shirley – the eldest of six siblings – was born on 18 July 1936 and Maureen – the only other girl in the family – was born on 25 January 1940. The sisters grew up in Guildford where their father Leonard worked as a driver and their mum Florence was a shop assistant.

“We grew up climbing trees with the boys and fishing in Mandurah,” says Shirley, who went on to have three children of her own. “And when we were both married, I lived in Embleton and Maureen lived nearby in West Midland, so we were able to see each other regularly, and always for our children’s birthdays.”

The sisters have also shared a love of animals throughout their lives, with Maureen’s cat having moved into Mercy Place Mandurah with her last year, and Shirley’s dog a regular visitor, along with her husband.

“We both really enjoy spending time with Lucky,” adds Maureen, who has four children. “And we love the fact that we live next door to each other. It means we’re able to share laughs, spend time in each other’s rooms, or sit outside in the beautiful garden here which we both just adore.

“We also regularly reminisce and take trips down memory lane - I think we’ve been fortunate to have not just been sisters, but also very good friends throughout our lives.”

Mercy Place Mandurah Service Manager, Simone Baxter, says both Shirley and Maureen’s families were delighted that they had been able to move into the same aged care home, and even live next door to each other.

“It is heart-warming to see Shirley and Maureen enjoying quality time together every day. It’s clear that despite being sisters they are great friends,” she says.

“We’re fortunate at Mercy Place Mandurah that many of our seniors have formed strong bonds with fellow residents, and as a result we have a close-knit community where seniors genuinely enjoy each other’s company and friendships flourish.”

International Day of Friendship is a United Nations day that promotes the role that friendship plays in promoting peace in many cultures. It is observed on July 30 each year.