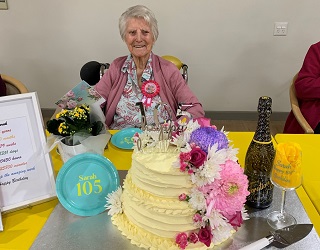 Sarah Esplin who recently turned 105, is not your average centenarian. She's led a full life and shares her secrets to longevity. Sarah who is a resident at Uniting Farmborough aged care home in Unanderra, says the key to having lived a happy and contented life is, not worrying about the things you can't control.

"Always remember to be kind to yourself and others too and that will give you a great sense of satisfaction," says Sarah.

"I always try and be helpful to others in everything that I do, I try to put a smile on someone's face," says Sarah.

Sarah was born in Yorkshire, England in 1916, to Richard and Edith and grew up with six siblings.

Sarah began her life of dedication to helping others very early on, spending many of her formative years serving in the armed forces during World War 2.

She often helped out in The Officers' Mess where she would eventually meet her future husband Cliff.

They had 3 daughters together and lived in the seaside village of Redcar in England for many years before they migrated to Australia in 1964, settling in Wollongong.

When Cliff passed away at the age of 61, Sarah began volunteering with Legacy, a charity supporting the partners and children of war veterans.

A highlight of her time with Legacy, was the opportunity to hold the Olympic torch during the relay for the Sydney 2000 games.

"It was so thrilling and such an emotional experience to be able to be part of the tour when one of the other Legacy volunteers ran with the torch," said Sarah.

Sarah moved into Uniting Farmborough residential aged care home in 2013 and continues to bring lots of cheer and smiles to her fellow residents and staff.

She continued her connection to the Olympics recently when she participated in the "Uniting Farmborough Olympics" - a themed activity organised by staff at the home, to coincide with the sporting event in Tokyo.

"I have always enjoyed being active and the Olympics has held a special place in my heart, so I put in my best effort and even won a few medals!" said Sarah.

Find out more about Uniting.