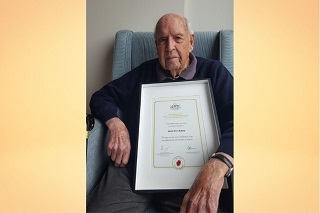 International Day of Older Persons on Friday 1 October will be a special time for residents at Mercy Place Mont Clare.

The not-for-profit age care home will be celebrating its seniors and the contributions they have made to communities during their lifetimes, while at the same time asking a number of residents to take a trip down memory lane and give a talk about their lives.

One of those involved is 98-year-old Basil Balme, a previous Scotch Collegian in Perth and head boy who is one of the oldest residents at the Claremont-based home.

Dr Balme enlisted in the Navy in 1940 - following in his father’s footsteps who fought in the trenches in France during the First World War.

“I was largely involved in convoy duties, escorting other ships throughout the Mediterranean and England,” recalls Dr Balme, who lost three of his closest school friends when they were killed during training for the Air Force.

“I originally trained as a radar operator and spent all the war years at sea either on English cruisers or corvettes.  For several months I was on board with Philip Mountbatten, who would later become Prince Philip, Duke of Edinburgh, and I remember having several conversations with him.

“One of the most vivid memories I have was our involvement in the sinking of a Japanese submarine after we dropped bombs. We just had to accept what we were instructed to do.”

“There are many residents like Basil at Mercy Place Mont Clare who have had incredibly interesting lives, and International Day of Older Persons gives us a wonderful opportunity to celebrate them and hear more about their individual journeys,” she says.

“During that time they have, in many cases, served their country and dedicated a great deal of time to their community, and that’s why everyone here was keen to highlight the important contributions that so many of our seniors have made to society over many, many decades.”

The United Nations' (UN) International Day of Older Persons is celebrated annually on October 1 to recognise the contributions of older persons and to examine issues that affect their lives.