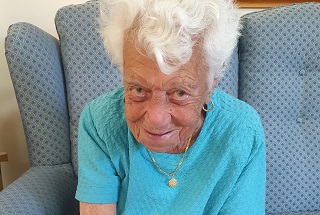 Mercy Place Edgewater resident Josephine DeBono will celebrate her 100th birthday today surrounded by family and friends who say the centenarian has been committed to others throughout her life and still has a wonderful heart.

And in a century that’s seen two World Wars, the landing of man on the moon, and just recently adventurers being blasted into space, as well as a myriad other world-shaping events, Mrs DeBono puts her longevity down to keeping busy and helping others.

Mrs DeBono, who was born in Malta in 1921 and hails from a large family, has already received her letter from the Queen, which is now framed and in her room.

And after a celebratory lunch followed by birthday cake at the not-for-profit home on the day, she will officially celebrate her birthday with her extended family next weekend.

Mercy Place Edgewater Acting General Manager, Amanda Page, says Josephine is an inspiring lady who was dedicated to her community as well as her family.

“Everyone at Mercy Place Edgewater likes and respects Josephine very much and we’re all delighted that she has reached this major milestone; we’ll be making a big fuss of her on her birthday and we’ll also make sure she is able to do some of her favourite things, like sitting in her garden in the sun,” she says.

“Maintaining good health throughout life is a key factor when it comes to ageing well, but things like staying engaged within the community and maintaining relationships with family and friends are just as important to positive ageing, which we place a strong emphasis on at Mercy Place Edgewater.”