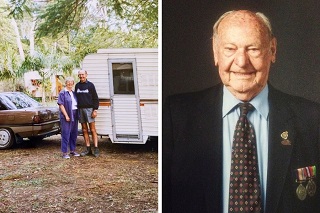 On 28 March, Resthaven Riverland Community Services client, Mr Leslie ‘Les’ Voigt, celebrated his big 100. Growing up in Robertstown, in the mid-north of South Australia, on his father’s farm, Les developed his skills in handy work. "We had a mixed farm on 640 acres, so we had a lot to do each day," Les says.

"I enjoyed school, particularly maths, but I left after grade 7 to work on the farm full-time."

In 1939, at the beginning of World War II, Les joined the Australian Army at 18 years of age.

"I started as a foot soldier, but soon transferred into transportation. A group of us would cart the goods to Alice Springs, a four-day trip from where we were, as there was no railroad back then."

"After some time, I worked in petrol supply, going between bases where needed. I learnt a lot back then, and a lot about myself."

During the war, a group of soldiers, Les included, camped out at Cheltenham Racecourse in England, and made their way over to the dance.

"I met my dear Muriel - Mickie, we called her. She was with a group of her friends, and I was with mine, but they all caught the train and we both hung back. The rest is history."

Les and Mickie married once the war ended, in 1946, settling down in a house of their own in Adelaide.

"She did a great job at looking after our three children, and I got myself into the car business."

Les continued to work at Chrysler Australia for the rest of his working life, becoming the ‘leading man’, and retired early at the age of 55.

"Mitsubishi took over then, and gave us all a reasonable package to retire. I didn’t mind though, I ended up doing handy man jobs here and there for a bit of extra cash, I even found work for a while in the Robertstown Council."

During this time, Les and Mickie relocated back to his hometown, Robertstown, before moving back to Adelaide for good, in 1960.

Les and Mickie’s children had grown up, and so they bought a caravan, and travelled across Australia.

"This was the best time of our lives, we used to chase the summer, and stay in Queensland during the miserable, winter months, and then go where the wind would take us."

Mickie kept a diary of their travels, and when she passed away, Les took her notes, and started writing his autobiography, currently being printed for his family.

Now, Les resides in Loxton, having lived independently up until recently.

Les celebrated his milestone with friends and family at the Loxton Uniting Church for morning tea.

As a 100-year-old veteran, Les’ advice is to, "Live your life as good as you can. It is fleeting, so you have to live it while you can."