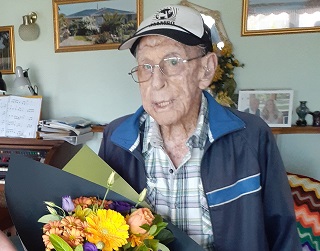 100-year-old Mr Kelvin Wegener, was born on his family farm in the Barossa Valley, where he grew up with two brothers. "My parents were strict, honest people – I learned a lot about life from them that I am grateful for."

Mr Wegener walked two miles to school every day, until he graduated from Nuriootpa High School at the age of 17.

"After I finished, I stayed back at the farm full-time. I took over the sheep shearing, starting off manually, then I moved on to the electric shearers when they came about – much easier."

Soon, World War II began, and Mr Wegener signed up to be a foot soldier.

"It was a lot of walking around, so I signed up for the Royal Air Force, and was employed as their spitfire mechanic."

When the war ended in 1945, Mr Wegener returned home, claiming his soldier's block in Naracoorte, where he started up his own farm.

"I was so proud to have my own farm, and I got to work right away, with the knowledge I picked up from my parents."

At the age of 25, Mr Wegener met a young woman, Betty Pomery, who would soon become his wife.

The newlyweds soon welcomed a daughter, Meredith, into their home on the farm.

"The three of us lived a great life together on that farm, it suited us quite well."

When Mr and Mrs Wegener retired from their farm, they purchased a home in Victor Harbor, where Mr Wegener resides today.

"Life is peaceful here. I’m close to the beach, and Woolworths – I ride my gopher there every day, in between my visits from Resthaven."