"Volunteering opened a door for me that had been shut," says Elaine 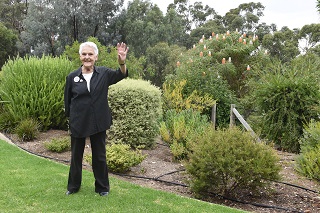 Elaine Crettenden enjoys her time volunteering with Resthaven Bellevue Heights, and her long association with the organisation stretches back to 1988, when her late husband, Ron, was appointed as a member of the Resthaven Board.

"Ron and I were married in 1982," Elaine explains. "I had been interested in volunteering back then, I just didn’t have the capacity at the time."

Elaine and Ron soon found a home together in the Adelaide Hills town of Birdwood.

"I soon stumbled upon a day care centre in nearby Gumeracha, less than 10 minutes away from us, and they had a volunteering position available. I have been volunteering ever since!"

Elaine later found a volunteer role at the Royal Adelaide Hospital, assisting in the emergency department.

"Volunteering opened a door for me that had been shut, and that’s one of the greatest things about it."

"Ron was involved so heavily with Resthaven during his time on the Board, and he was fantastic with people. It made me want to put my volunteer services to work at Resthaven, too!"

When Ron retired from the Resthaven Board, the Crettenden’s relocated to Elaine’s hometown of Devonport in Tasmania, where they stayed until Ron’s passing in 2012.

Three years ago, Elaine found herself returning to Adelaide, and to Resthaven, to volunteer once again.

"It made sense for me to go with Resthaven, as I had been involved for so many years in a volunteering capacity, and I’m just a mere walk away from the residential aged care home."

Elaine keeps busy with her local choir group, practicing each Tuesday, and calling the bingo each week at Resthaven Bellevue Heights.

"You simply cannot volunteer unless you get something out of it. It fills my soul, and gives me a sense of purpose, which is especially important to me now as I get older."

Meaningful and fulfilling volunteer roles are available with all Resthaven sites. For details, visit Volunteer with us - Resthaven