Four-Legged Volunteers Bring a 'Bark' of Joy to Residents 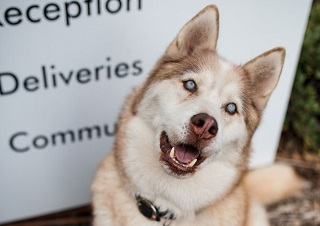 Resthaven Paradise’s very own canine volunteer, Shadow, brings a ‘bark’ of joy to residents each week, accompanied by his owner, and Resthaven volunteer, Russell Dahms.

"We started volunteering with Resthaven Paradise in July [2021]. The staff and residents have absolutely fallen in love with Shadow, and the feeling is mutual."

"I discovered he loves one on one, and group sessions with residents."

"It is now at the stage where he sits by the gate, waiting to go to Resthaven Paradise! We will often visit more than once a week – he just loves it."

"Occasionally, I take along some treats that residents can give him, and he is always looking for them!"

Shadow is not the only cuddly volunteer making an appearance at Resthaven Paradise these days.

"My other husky is Flicker, a two-year-old Siberian husky, crossed with poodle and Manchester terrier. She is quite shy, and so she only occasionally visits with us, and residents love cuddling her when she does."

"It never ceases to amaze me to see the big smile on residents’ faces when they meet the huskies, especially those experiencing memory loss."

"A lot of residents used to own dogs themselves, and they particularly enjoy having a canine friend again."

In speaking with Russell, Angela Snowball, Volunteer Services and Special Projects Support Officer, remarked, "I can’t believe how well you know your way around Resthaven Paradise!"

Russell laughed and said it was Shadow who was leading him – Shadow knew where to go.

"One resident told me that on the days their family were unable to make it, a visit from Shadow and Russell becomes the highlight of their day," Ange explained.

When Shadow and Flicker aren’t visiting residents, you will find them enjoying long walks in Linear Park, or having a run in one of the local dog parks.

Resthaven welcomes new volunteers, not just the four-legged variety, to join the team.