Recognising a Lifetime of Commitment to the Community 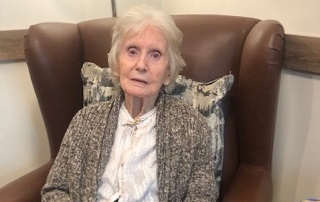 Volunteers young and old will be celebrated at a local Mandurah not-for-profit aged care home during Volunteer Week, which runs from Monday 16 - Sunday 22 May.

And in addition to thanking current volunteers at Mercy Place Mandurah, residents who have devoted themselves to the Mandurah community will also be celebrated.

One such senior is 93-year-old Mary King, who moved with her husband and three children to Mandurah in 1975 to become the town’s new librarian, and who immersed herself into volunteer work within the community at the same time.

From volunteering for the local historical society, at the Mandurah Community Museum, various Parents and Citizens (P&C) Associations connected to the schools attended by her three children, and the local church, Mary King spent over four decades supporting her local community.

“Mum was always a busy lady, and I guess she blazed a trial as a working woman in the 1970s who was not only running the local library, but also helping oversee the building and supervision of Mandurah’s new library, which was opened in 1979,” says daughter Clare Papasergio.

“During her lifetime she was on so many organisations as the president or secretary that we’ve lost count, and she has been presented with so many certificates of appreciation for her involvement in so many Mandurah organisations, in fact she even wrote a book on the history of Mandurah.

“She may have been born in Bridgetown and brought up in Manjimup and the south-west, but her heart is well and truly in Mandurah.”

Mercy Health General Manager, Simone Baxter, said Mercy Health wanted to recognise seniors at the home who had contributed to the Mandurah community over their lifetimes.

“National Volunteer Week is a great opportunity to reflect not just on our incredible group of dedicated volunteers at Mercy Place Mandurah, but also on the seniors we have living with us, like Mary, who have given their time so selflessly over their lifetimes,” says Ms Baxter.

“More generally, volunteers make an invaluable contribution to Mercy Health, and National Volunteer Week is a wonderful opportunity to publicly recognise both their generosity of time and their big hearts.”

Mary’s position as Mandurah librarian led to her being approached to be on many local committees, which included:

Click here to find out more about Mercy Health