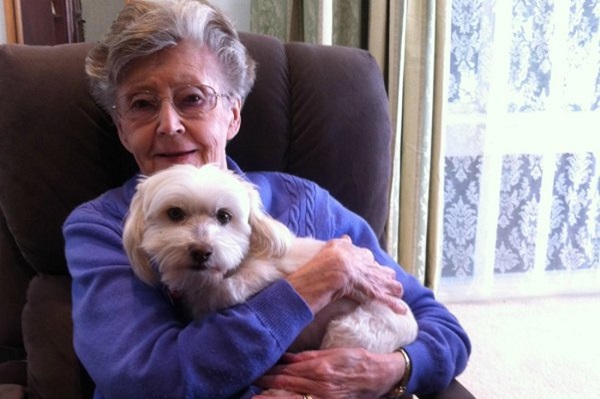 It was a difficult but necessary decision for Martin Pascal-Murray to place his 85-year-old mother, Doreen, into a Bupa Aged Care home last year.

Doreen had lived on her own since her husband died in 2013, and although Martin visited and cooked for her every day, her Alzheimer’s was slowly taking a stronger hold and he was beginning to fear for her safety.

“I was with mum all day every day, but when I left in the evening she just wasn’t safe. I was cooking all of her meals, and doing all of the washing which was fine, but it got to the stage where I couldn’t leave her something to heat up in the microwave as she would forget how to work the microwave,” tells Martin.

“Sometimes she would even go wandering. She just wasn’t safe.”

Martin knew that he did not want to stop looking after Doreen, but with no other family living nearby, it was time to get some help for them both and that help came in the form of the Bupa Aged Care home in Donvale, Victoria.

“I told her ‘Mum, I’m not going to stop caring for you, I just can’t do it on my own anymore.’ Even though she is in the Bupa care home at Donvale, I still see myself as her primary carer,” says Martin.

“Dog’s have always been a huge part of Mum’s life, and mine,” says Martin. “When I was looking at homes one of the Bupa staff members made me smile because I was checking constantly about whether I would be able to take Charlie to visit, and she looked at a picture of Charlie and said ‘we do have a rule about little dogs like that,’ I asked what that was and she replied that he must come with me every time I visit.”

It was a great relief for Martin, but also a great comfort for Doreen who missed her home.

“She’s very comfortable and being looked after tremendously well but there are days where she misses her own place, even though she understands she can’t be on her own any more,” tells Martin.

“When Charlie comes I think it’s like being at home,” says Doreen. “I miss him when he goes home.”

But it’s not only Doreen who receives great pleasure from Charlie’s twice-daily visits. All of the residents get a kick from a visit from their furry friend.

“It takes a long time for Charlie to come in and out because everyone wants to stop him and have a pat,” tells Doreen. Martin says it helps Doreen to build a sense of community and make new friends in her new environment.

“You wouldn’t believe the way their faces light up when Charlie walks into that place,” says Martin. “I’m a little bit selfish about Charlie too because he’s an attention grabber for my mum and he helps my mum settle in and make friends because they all come running up to talk to Charlie, so they all talk to my mum as well.”

The decision to place his dear old mum in the care home may not have been easy for Martin, but knowing Charlie is welcome in his Mum’s new home helps him remember that it was the best decision for all.