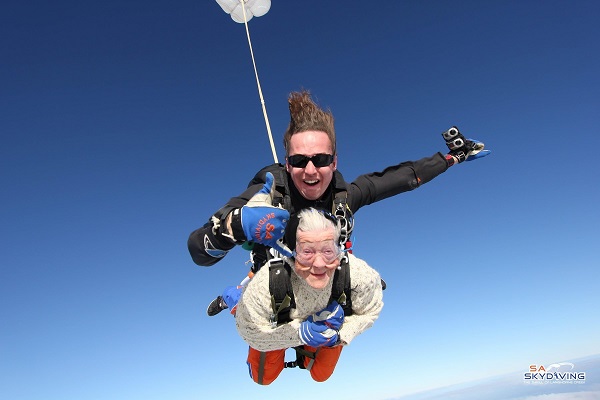 She celebrated her 100th birthday with a sky dive, becoming the oldest South Australian to do so. Now, 12 months on, ACH Group client Irene O’Shea is set to enter the history books once again.

The Athelstone great grandmother hopes to become the oldest person in the world to jump from a plane by jumping 15,000 feet in a tandem parachute next week, accelerating to speeds of more than 200kph.

The record was last set by UK war veteran Verdun Hayes in May this year.

“I’m really enjoyed it last time,” Irene says. “I wasn’t a bit scared and I won’t lose any sleep over it this time either.”

Irene’s son-in-law Mike FitzHenry says to set a new world record, she must be more than 38 days past the age of 101.

Verdun has vowed to jump again if his record is broken. Irene says if that happens, she won’t rule out jumping again.

“It all depends on my health – if my brain is still working, and I’m keeping well, there’s a possibility I might give it another go.

“I’ve had too hard a life to give up easily. I’ve had to raise two kids without my husband from the age of 37.”

Mike says while the family felt apprehensive before last year’s sky dive, they were all very proud of her achievements.

“When she wants to do something, there’s no stopping her, really,” he says. “She’s always been adventurous.”

Her story has caught the attention of the mainstream media. She appeared on ABC TV’s ‘You Can’t Ask That’, New Idea, Channel 9 news, Hit 107.1 and The Adelaide Advertiser.

Irene admits to being a ‘bit of a daredevil’ – she enjoyed a ride as a pillion passenger on a Harley Davidson motorbike at 92 years young in the UK.

She’s travelled the world by herself to over 22 countries across Europe, the US, Asia and the UK, many of them in the last three decades. That includes a world tour, taking in Germany, France, Finland and Russia, on her own, at 84.

She drove herself and companions to most parts of Australia including Uluru, which she climbed at 64, and Perth at the age of 70 with two friends, followed by Coffs Harbor, Alice Springs and Sydney.

Irene still drives, despite having a mild stroke a couple of years ago, and still reads without glasses.

“Her license was suspended, but as soon as she could apply for it again, six weeks later, she went for it,” Mike says.

Her story is all the more remarkable given that she broke her hip in a fall earlier this year.

Irene lives at home independently with support from ACH Group Home Care including shopping, domestic help and gardening. She enjoys going to social clubs every week and to celebrate her 101st birthday, went to see Disney’s Frozen on Ice.

Irene has been a customer with ACH Group since September 2014.

Donations to Irene’s MND fund can be made here.

Find out more about ACH Group.