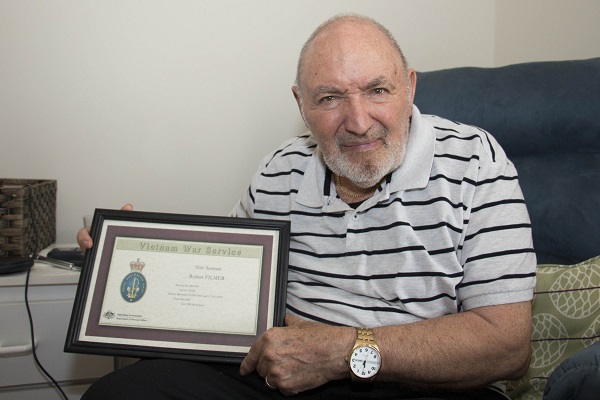 Robert, who served as a ship’s diver in Vietnam, will be among nine Uniting AgeWell clients to lead the Anzac Day parade on April 25.

The clients from Geelong, Bendigo and across Melbourne will travel in vehicles with other veterans through Melbourne to the Shrine of Remembrance.

Robert, now aged 75 and living at Uniting AgeWell’s Noble Park Community, has rarely spoken about his time in the war. That was until he received a letter inviting him to take part in the parade.

“He got the letter and I think he has been proud of his service ever since. I think he deserved it for what he did.”

At just 22, Able Seaman Robert Filmer spent his time diving into murky waters in search of bombs placed under ships by enemy forces.

It was the Vietnam War, and Robert had the immense responsibility of dismantling bombs between 1965 and 1966.

The butcher from Sydney’s eastern suburbs followed his cousin’s footsteps and joined the Navy to become a ship’s diver.

“I did an induction course at Rushcutters Bay, in Sydney, and they taught me to dive there,” he said.

“We were trained to look for bombs in all conditions, even at night time.”

Robert spent 82 days at sea on HMAS Sydney putting his life on the line to protect his comrades.

Uniting AgeWell will commemorate the service of the many clients who served in the armed forces, at events and services across Victoria and Tasmania on Anzac Day.