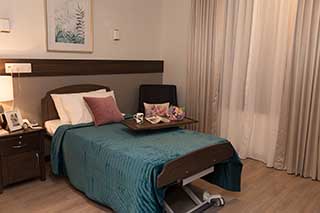 Regis has been a part of the Nedlands community for over ten years, having acquired the site which the Salvation Army sold in 2005.  The Salvation Army purchased the land in 1905 and had utilised the area for a variety of purposes including farming, a men’s retreat, the Nedlands boy’s home and Hollywood Children's Village.  The aged care reresidence on this part of the site was formerly known as Regis Park Lodge before its closure in 2016.  Regis recognised the growing need for services in the local area, making the decision to redevelop this site.

By the end of August 2018 across the country Regis will have 63 aged care residences, six home care sites, seven day therapy centres and 11 retirement villages. Regis Aged Care’s focus in 2018 has been centred on growth of their aged care and retirement living operations in Western Australia. Alongside Regis’ six existing aged care residences in WA, Regis also has:

Regis continues to strive to provide quality care options to their residents in line with changing needs, wants and expectations. They do this through staff innovation, embracing new technologies and continuing to think outside the square.