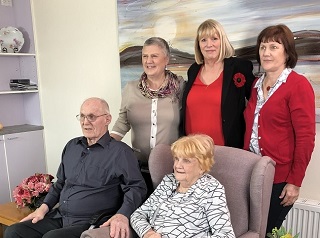 Run in conjunction with NOVA Radio, HESTA’s Thank You Project asks listeners to send messages of thanks to people who work in health and community services. Carol Bailie, whose parents, Laurie and Margaret, are residents at Bundoora, nominated Linda for an award.

Laurie and Margaret are both active members of the Bundoora community, taking part in the annual Senior MasterChef contest, with Margaret showing her aptitude for acting. They recently celebrated their 65th wedding anniversary.

NOVA Radio sent out a film crew to interview Carol, Linda, Margaret and Laurie. Carol took the hot seat first and explained what had made her put in a nomination. Carol said that choosing an aged care home was an emotional decision for the whole family, but as soon as they met Linda, their worries disappeared.

Next, Linda was put in front of the cameras, and we heard about her path to her role in aged care, and how much pleasure her role brings her.

Pictured: Linda, standing centre, with Laurie and Margaret seated, and their two daughters either side of Linda