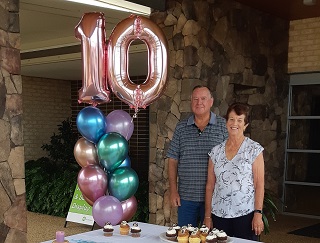 On 23rd April 2020 Bethanie Esprit officially turned 10. Whilst the pre COVID-19 plans involved a bit more fanfare, the celebration didn’t go unnoticed as residents embraced the community they have built together, whilst adhering to social distancing rules.

The first two settlements occurred on 23rd April 2010 and Villa 1 residents Bruce and Elaine McDonald, who were one of those first two, are still happily living there. Elaine was the first secretary on the Residents Committee and also started the first social newsletter.

Elaine says, “Moving into the Retirement Village was something we had planned for many years. Bethanie Esprit has a wonderful sense of community with plenty of activities if you wish to participate. You only need to walk around the Village and you always find someone to say hello to, so one doesn't have to feel lonely or isolated.

“It suits our lifestyle as we travel most winters in our caravan, and the security it provides gives us peace of mind while we are away. When asked we always tell people not to leave moving into a Lifestyle Village until you are too old - if you leave it too late, then you can't appreciate all the facilities on offer.”

21 settlements in total had occurred by the end of December 2010, plus another 37 settlements in the following five years, until demand exceeded supply. Once the last 2 stages of construction were completed, sales continued at a steady rate.

The clubhouse and swimming pool were constructed in 2012 with residents receiving a key to the doors of these facilities in December, just in time to have their first Christmas lunch. The official opening was in March 2013 and was attended by the Federal Member for Forrest, Nola Marino, and at that time the new bowling green had also been completed.

At the 2017 Master Builders – Bankwest Building Excellence Awards – South West, Perkins Development took home two awards for their construction works completed on the vibrant Village. The first category was for the ‘Most Liveable Homes Award’ and the second was for ‘Multi-Residential Developments over $2 million.’.

As of today, there are 117 residents across 82 villas, which were built in stages between 2010 and 2016. Plus, the new 34 cottage development which is now selling off Stage 2, with Stage 1 sold out within just weeks of its release. A number of the cottages are now at lock up stage and the remainder fast approaching. Estimated completion date for all 34 cottages is August 2022.

Upgrades over the years have included the Men’s Shed and Activity Centre, built in 2015 and the first 14 caravan parking bays built in 2016. A further six bays were built at the end of 2019 in anticipation of additional need when the cottage stages have been completed.

The youngest resident is 59 years old, but there are also eight residents over 90 in the village, with the eldest being Mrs Elizabeth Taylor (known as Betty), who will turn 95 in September. Another who turned 90 last year is passionate about vintage motorcycles and still has a licence to ride his favourite bike, which he does on a regular basis along with a village neighbour, also a motorbike enthusiast.

Bethanie Esprit Manager Colleen Fitzgerald is proud of her Esprit community and says, “Romance has not been amiss in the village either, with one couple who lived only a few villas apart, meeting and then marrying. The Clubhouse has also been the venue for a wedding in March 2015 when a lady resident who became a widow, married a long-time friend who was a widower and the couple are now living together in the village.”