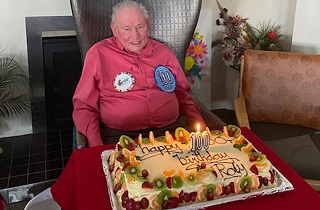 A legend of the Australian Football League (AFL) and Opal By the Bay resident, Roly Caird recently chalked up an admirable personal milestone, celebrating his 100th birthday.

Roly has been acknowledged by the AFL and the Victorian Football League Umpires Associations for his contribution to the game and featured in a recent story in The Age.

Beginning his umpiring career in round one 1955, donning the white coat and hat and waving the white flags, Roly’s umpiring talent was soon recognised and his career progressed quickly. A career highlight was umpiring the 1959 AFL Grand Final between Essendon and Melbourne.

Roly went on to umpire 231 VFL games including six finals and one grand final. His love of the game continues to this day, and as a member of the VFLUA Executive Committee, Roly became a life member in 1966.

On retiring from the game, he continued to lead a long and active life pursuing his second love, golf, for 23 years. Roly regularly attends the ex-Umpires’ luncheon and was a special guest at the Grand Final Umpires’ lunch in 2019.

Roly celebrated his special milestone in style surrounded by family and friends at Opal By the Bay care community, with an afternoon tea of delicious savoury and sweet canapes and French champagne.