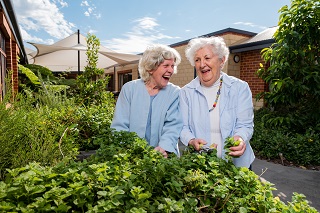 After more than 10 years volunteering at Baptistcare David Buttfield Centre Residential Care in Gwelup, Bev Denko still says it’s hearing the residents’ stories that she enjoys the most.

Three days a week, the active 86-year-old from Carine gives up her time to help out in the garden, the kiosk or the dining room, or to keep residents company at mealtimes, on walks around the grounds or at the Monday afternoon bingo sessions.

You’ll also often find her watering residents’ plants or giving residents a hand massage. She’s even helped one resident build a vegie patch in the garden.

But it’s the chats and friendships that Mrs Denko says are the best part of being a Baptistcare volunteer.

“Residents often like talking about their early life and I love hearing their stories. I love doing what I do at Baptistcare,” she said.

“Volunteering is very satisfying, but it’s the people who make it so special. If you go in with an open mind, I think you can get so much out of the volunteer experience.”

Mrs Denko started to extend her visits so she could not only spend time with her mother, but also lend a hand where she could and chat with other residents.

“It was only natural that I continued volunteering even after mum died in 2013, just nine days before her 99th birthday,” Mrs Denko said.

Over the years Mrs Denko has formed close friendships with many of the residents, taking time to listen as they share their special memories.

“One of the residents I visit is deaf. We use a bit of sign-language and I write messages on a notepad, but we seem to communicate okay,” she said.

When she’s not volunteering at Baptistcare, Mrs Denko is busy catching up with friends, going to the cinema or her Zumba class, or heading out for a relaxing walk.

Pictured: Margret Varrica is just one of the many residents at Baptistcare David Buttfield Centre who have benefited from Bev’s friendship over the years.