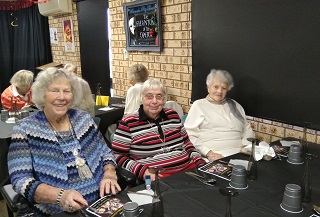 Staff of the Home organised the event for residents, who had been through quite a difficult year - impacted by bushfires and then followed by a pandemic.

Residents received personal invitations a week before, and many dressed up for the gala event.

The Home’s Ritz Theatre was decorated with a black and silver theme including, tablecloths, crockery, cutlery and glassware.

Lunch consisted of smoked cod and salad followed by a scrumptious cheesecake with strawberry glaze and champagne. Images of Andrew Lloyd Webber’s movie titles such as Cats and Phantom of the Opera were projected on the curtain screen and soft music from the concert played throughout lunch.

Recreational Activities Officer, Walter Thomasson said, “During the movie concert many residents joyfully sang along and clapped at the end of each song.”

“When it ended, the residents enthusiastically gave a round of applause, which showed it was a success and how much they enjoyed it,” he added.

“On the weekend, I also presented an encore presentation of the movie concert with a high tea for those residents less mobile. To my amazement nine residents who attended the luncheon event, turned up wanting to see the concert for a second time. It was lucky I had room for them. Again, the event was a huge success and ended in a rousing applause.

“A wonderful time was had by all at both events. I enjoy working with the residents. To enrich our residents’ lives with a movie concert and see the joy on their faces is very rewarding,” said Walter.

Find out more about Catholic Healthcare.