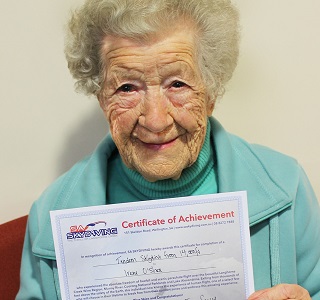 Resthaven Paradise and Eastern Community Services client, Irene O’Shea, who celebrated her 105th birthday on 30 May, is not your average centenarian.

Since that first jump, Irene has tandem jumped twice more, at the ages of 101, and at 102 years 6 months and 8 days, becoming not only the oldest woman to do so, but the oldest person to jump from that height.

Born in Wheatacre (Norfolk, England) in 1916, Irene was one of seven children, with two older brothers, three younger sisters, and one younger brother.

She married Thomas O’Shea on 17 August, 1940 (a week before the Battle of Britain and the London bombing). Together, they had two children, Shelagh and Michael.

When Irene was widowed in 1953, she did several odd jobs to make ends meet, including cleaning and making chocolate.

In the 1970s, Shelagh emigrated from England to Australia. Irene followed in 1974, and began work as a Nurses’ Assistant at the Magill Nursing Home. There she stayed until her retirement.

Sadly, Shelagh passed away in 2008, aged 67, from Motor Neurone Disease. However, it was this tragedy which prompted Irene’s daredevil skydiving feat for her milestone birthday in 2016.

"This was for my daughter," she says. "I wanted to do something to raise awareness of Motor Neurone Disease."

Whilst skydiving aged 100 was possibly Irene’s most impressive feat, it certainly wasn’t her first – she climbed Uluru aged 64, travelled all over Australia with two friends in her 70s, and travelled (independently, of course) throughout the world well into her 80s.

She also enjoys reading, various word puzzles, and attending an ‘over 50s club’ to play board games and to socialise with friends.

When asked if she has any tips for longevity, Irene simply smiles and shrugs, "You never know how much time you’ll have – if you’re meant to live to 100, you will. If you aren’t, you won’t."

"Just live your life, that’s all you can do."

Irene celebrated her 105th birthday with a festive lunch with family and friends.