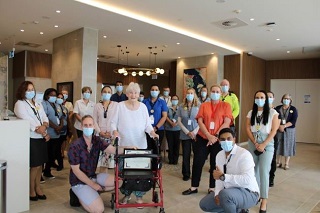 Mrs Salmon was also the first resident to move into Anglicare’s Oran Park Retirement Village next door when it first opened 10 years ago.

“I had to move out of Oran Park when I needed to move into aged care, “ she said. “But I’ve been looking forward to coming back – I missed all my friends. It’s lovely to be next door again to such a wonderful community.”

Since opening last month, Barry Marsh House is already home to 16 new residents with more being welcomed every week.

The new residential aged care home has been named after local identity to Camden, the late Reverend Barry Marsh. Mr Marsh was the long-serving Rector of Narellan Anglican Church from 1970 until 1997 and was instrumental in starting Macarthur Anglican School.

The retirement village knitting club has been busy crafting new blankets for Barry Marsh House residents, while other Oran Park locals have already put their hand up to volunteer at the new aged care facility.

Find out more about Anglicare.