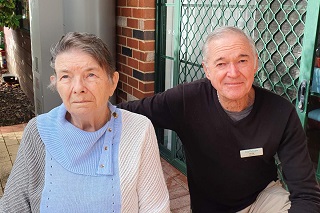 But while he has done everything from refereeing carpet bowls to chatting with residents over a cuppa, the one thing that has remained constant over the years is playing gin rummy.

The two-player card game has been played around the world for over a century and was a favourite pastime of legendary Hollywood actress, Betty White, who once famously battled her husband in a game that lasted two years.

But while Peter’s games with residents are short and sweet, he admits that William Carey Court has its own ‘golden girls’ who could give the very competitive Ms White a run for her money.

“Despite how long I’ve been playing, my gin rummy track record isn’t too great,” he said.

But one thing I love about the game is that anyone can play, it’s simple and doesn’t have many rules.”

Residents Penny Penny Gibbs (75) and Jeanette Jeanette Farmer (80) are gin rummy aficionados who challenge the volunteer every Friday morning, eager to show off their skills and increase their tally.

Although Peter loves a competitive card game, he says the true reason he keeps volunteering is because of the friendships he has formed over the years.

“We have such a great community at William Carey Court, and I’ve met some of my best mates by volunteering here,” said Peter.

“Volunteering has been an extremely rewarding experience and I am honoured to officially be Baptistcare’s longest serving volunteer.”

Baptistcare CEO, Russell Bricknell, said all volunteers make a wonderful contribution to the lives of residents, but people like Peter are extraordinary.

“To see how many years Peter has been offering friendship and support to the people who call William Carey Court home is humbling, but so is his belief that he is the real winner out of being a volunteer,” he said.

“We are enormously grateful for his time and commitment, and I know the residents, and particularly the gin rummy ladies, are looking forward to many more visits.”

If you’re interested in volunteering at Baptistcare, visit baptistcare.com.au/volunteering