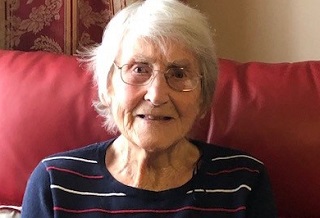 Mrs Goode is not the only female in her family to reach her centenarian birthday.

Mrs Goode was born on her family farm in North Hampfordshire, England. Her father was a builder.

"I was transferred to the regular army in 1939, where I was deployed to Naples, then Rome, before heading to Redding, where I met my Canadian husband."

"My army days were very memorable, especially V Day when I was in Rome. The streets were quiet and no one was out and about – I will never forget it."

"I met many friends and experienced many adventures before marrying."

The couple soon married in Margate, England, where they stayed for a few years, before deciding to move to Australia.

"We arrived by boat in 1965, starting off in Sydney, but then settling in Whyalla, South Australia, where we bought our family home."

Having lived a life of travel, Mrs Goode has no plans to stop anytime soon, most recently visiting Queensland, Western Australia and travelling within South Australia.

"I am proud to have gone back to visit England twice since living here."

When asked how she does it at her age, she replies, "I have never smoked or taken drugs, but I swear sometimes!"

"Above all, I have always lived a healthy, active lifestyle, while keeping my brain occupied."